You've never tasted anything so delicious as these crisp Maple Roasted Brussels Sprouts complete with bacon, pecans and a toss with maple syrup & balsamic. It's Brussels Sprouts taken to a whole new level!

OK, I have to be honest and say that I have never really liked Brussels sprouts. In fact, I actually intensely disliked them for years. And then along comes Houston's Restaurant and my opinion did a 180. Yep, they fixed these roasted brussels sprouts with a maple balsamic glaze that was out-of-this-world fantastic! I was hooked! 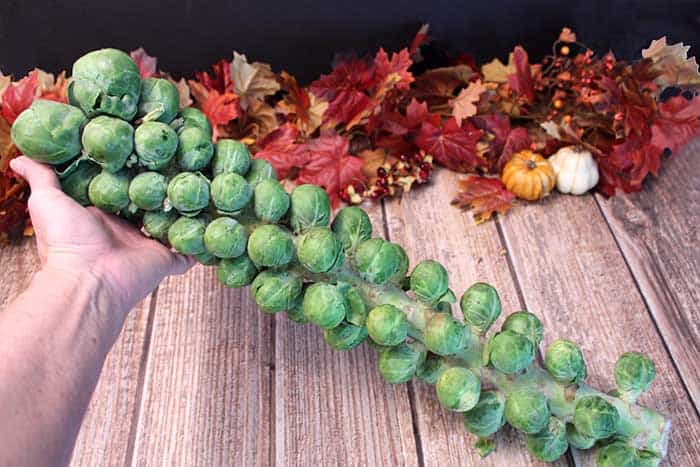 So when I saw this interesting stalk while grocery shopping last week, that looked just like brussels sprouts, I had to take a closer look. Yep, that's the way they grow! Pretty cool, huh.

I even met a woman at the checkout counter that said she used to grow them in her backyard and the kids were always fascinated by them. I think I would find it pretty fascinating myself.

There was a tag that was hanging from the stalk that also said you could cook them right on the stalk. Maybe I'll have to try it that way next time. If you want to try, I've included the instructions in the notes section of the recipe below. 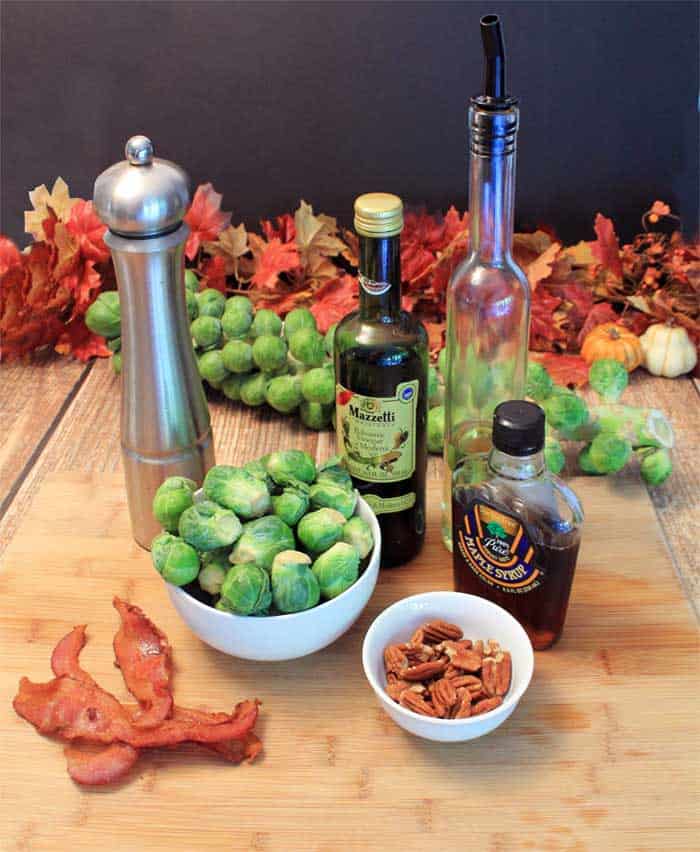 I'm so glad I finally added these little guys to my group of likes. They're a really healthy addition to any diet. 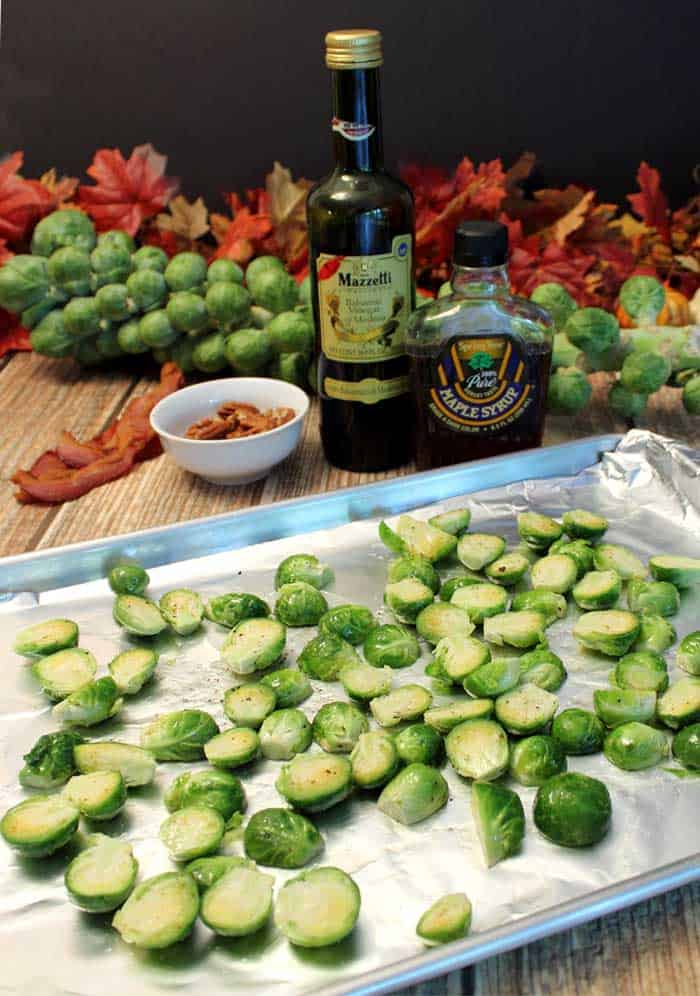 To prepare, just take off any of the outer leaves that look a little rough & torn, as they could be tough, then slice in half. Toss with some olive oil, and in this case bacon fat, and sprinkle with salt and pepper. Roast those babies until they're toasty and crisp. Oh, they're so delish! 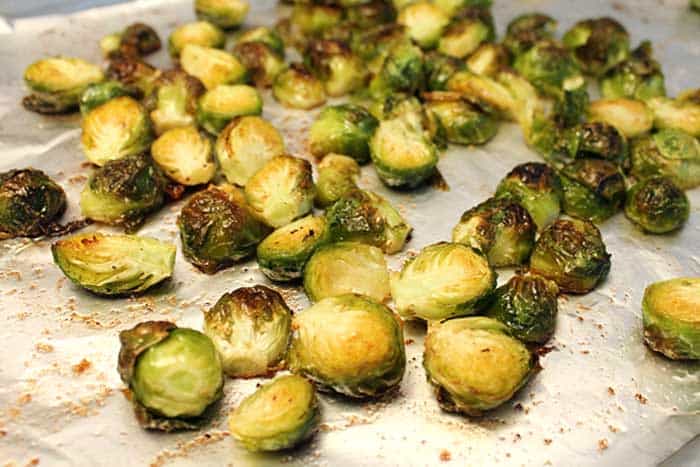 When they're done roasting, mix with maple syrup and balsamic and some of the bacon and put back in the oven just to glaze. That's it! When you serve them, top with remaining bacon and some extra special maple roasted pecans.

Oh yeah, I forgot to mention that I fancied the nuts up a bit (and if you do fix them this way, warning they're addictive, don't eat them all before the sprouts are done). Pop them in the oven to roast just prior to starting the sprouts. They only take 10 minutes and they make a great garnish not to mention a tasty snack option. 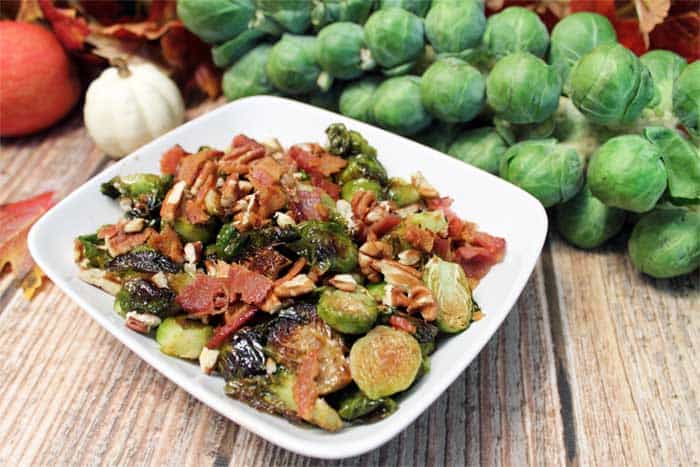 This picture doesn't do these delicious sprouts justice. They're sweet, a little crunchy and the perfect side to any meal. I like to serve mine with holiday turkey, grilled Cajun salmon or even my avocado stuffed chicken breast. Hope you enjoy! 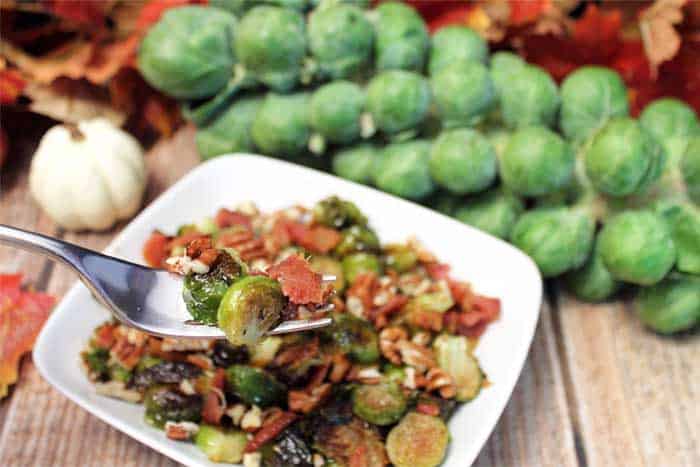 Maple Pecan Brussel sprouts are great for Thanksgiving. Another great side dish is my baked Sweet Potato Balls with marshmallow inside and gingersnap crumbs on the outside.

Try my bacon wrapped carrots with maple syrup for another tasty vegetable side dish.

Find more of the best recipes for Thanksgiving right here on 2CM! 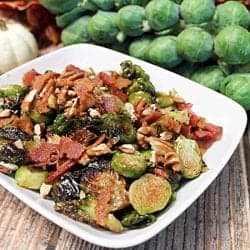 To cook on stalk: Place whole stalk, or cut in half if necessary, in a large roaster with 2 cups chicken stock or water. Cover and let steam in 350 degree oven for 20 minutes. Remove pan from oven & uncover. Mix ½ cup maple syrup with ⅛ cup olive oil. Brush on sprouts then season with salt & pepper. Return to oven and cook another 45 minutes, basting every 15 minutes with pan drippings. You want them to be nicely browned. Serve whole stalk on platter. Pretty cool!

This post has been updated and was first published on November 22, 2017.